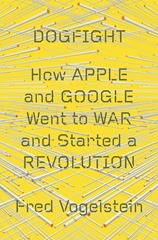 The first book I have finished this year is Dogfight: How Apple and Google Went to War and Started a Revolution by Fred Vogelstein. The book covers the development of the iPhone, iPad, development of Android based phones, looks at the legal battle that erupted between Samsung and Apple, and finally, what these gadgets have done to change the market in a broad sense. I have seen this stated in other reviews and it held true for me after reading the book myself, that the first two-thirds of the book is the best part of the book and that it tails off after that. I read the first two-thirds of the book over the course of five days and it took me another week to finish the last third of the book.

The first seven chapters make up the telling of the creation of the iPhone, Android, and the iPad and the battle that takes place between Apple and Google once Apple learns about Android. Those first seven chapters are the strongest and where we learn most interesting details about the inside stories of the two most popular mobile operating systems. It is in the telling of the back and forth story between Apple and Google where Fred Vogelstein shines in the book. The chapter covering the trial between Samsung and Apple was alright, just did not grab me as much as the previous seven chapters.  It did not cover as many interesting details which I guess is not a huge surprise given it was focused on a patent trial. The next two chapters are a bit different than the rest of the book, focusing on the more industry-wide effects that iOS and Android devices have had on the world of technology. From how it has effected websites, to media publishing, and the entertainment industry of movies and TV among other things.  While there is some good information in this section it just is a bit of a different turn for the book after a much closer look at a smaller set of topics in only two companies and topics in the first seven chapters.

Overall if you enjoy reading about technology and parts of the inside stories surrounding Apple and Google, there is enough good information I think to read this book in the end. Although it is interesting after reading this book and now several weeks after I have finished it, a lot of the details from it have not stuck with me as well as I might have thought since I have just so recently read it. 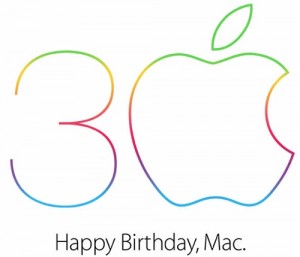 I am a few days late on this post since the Mac’s 30th anniversary was last week but I still wanted to share my thoughts. For me I have used Apple computers all my life. The first computer I used at home was one of the green-screened Apple II models. Over the course of the years I have used several Macintosh computer models and I am inclined to think that Apple and their computers have had a great effect on my continued love for all things technological. The first Mac computer I bought for myself was a Titanium PowerBook G4 in August of 2003 before I went off to my freshmen year of college at Gustavus Adolphus. That was a great laptop for me that served me through my entire college career. My Mac’s have served me well over the years and I hope they continue to.

John Gruber of Daring Fireball has a great post that he did yesterday on how in some key ways you can still see the design decisions from the very first Mac OS.

For one thing, they sweated the details. The greatest testimony to their genius is just how much of that original design is recognizable in today’s Mac OS X 10.9. A Mac user from 1984 could sit down in front of an iMac or MacBook today and recognize it as a successor to that original machine. That’s simply amazing.

Even more amazing is that some things haven’t changed at all. File, Edit, and View menus to start the Finder menu bar — the same today as in System 1 in 1984.

In a piece that touches on a similar topic MG Siegler over at ParisLemon — 30 Years Ago, Apple Was The Same Company talks about how the design philosophy and decisions that guided Apple 30 years ago with the first Mac are still present in their current products.

Finally Apple released a great video for the 30th anniversary of the Mac and I have included it below.

When I started to learn about SOPA and the Protect IP Act that were being considered in the House and the Senate, I was saddened to see that both of my Senators Klobuchar and Franken were supporters and co-sponsors of it. I wrote a short letter to Franken about my dislike for Protect IP and I got a letter back from his office which seemed to have as one of the main reasons for his support of it being the protection of American jobs. So in crafting a reply to that argument I did quite a bit of research.  With that research I ended up creating a lengthy reply that I think helps to show while Protect IP may be designed to protect some industries and jobs in them, it also as it is currently written will have quite a negative impact on many other industries and jobs. The results of what I found in my research are below.  If you want to see a PDF of this piece with all the footnotes and bibliography, you can download it here:  PDF

Let me make clear I am not against better enforcement of copyright, as long as it is done in a fair and just way both for the copyright holder and the accused party so that they have reasonable means to contest it if they feel they are wrongfully accused of infringement. Any new bill should balance the need of the copyright holder and potential new business’ ability to innovate without there being overburdened with legal worry.  After looking into SOPA and Protect IP they do not seem to fit into that criteria. END_OF_DOCUMENT_TOKEN_TO_BE_REPLACED

Two great articles that look at different angles as to why Apple has been so successful over the last decade.  The stat in the quote below from the NY Times piece, about how how if the iPad itself was a stand alone company, really illustrates how much of a success it has been.  The second article gives great insight on why Apple has been successful by explaining the philosophy that drives Apple and Steve Jobs.

Hit products like the iPod, the iPhone and the iPad are fueling Apple’s logic-defying growth. The latest entry — the iPad, introduced in April — is on track to deliver $15 billion to $20 billion in revenue in its first full year of sales, estimates A. M. Sacconaghi, an analyst at Sanford C. Bernstein. At that size, if the iPad were a stand-alone company, it would rank within the top third of the Fortune 500.

via At Apple, the Platform Is the Engine of Growth – NYTimes.com.

Apple’s successful conquest of Sony’s home turf could be seen as the final evidence that the Cupertino company is what Deutschman calls Sony’s “spiritual successor.” “Under Jobs, Apple has the kind of passion for design and innovation that Sony did in its heyday,” he says. “Everything they do is the ‘greatest thing we’ve ever done,’ which will ‘once again change the world.’ And recently, most of the time they’ve been right.

via How Steve Jobs ‘out-Japanned’ Japan

As an Apple geek, I am quite happy to see this story, about how Apple’s Macintosh computers are gaining a stronger presence on Minnesota college campuses with the students and the computers that the colleges and universities use themselves.  From the article there is no one cause listed for the reason to the increase in the number of Mac’s.  The reason’s vary from good marketing, to people being more familar with Apple products because of iPod’s and iPhones, to more exposure to Mac’s at early age sometimes through school.  Other reason’s are mentioned as well in the article.  For whatever the reason I am glad to see it gaining ground, since I have always been a fan.  To me it is just a very stable operating system, currently very little worry about viruses and for the most part things normally just work.

The Macintosh is on the march at Minnesota colleges and universities.

Apple’s computers, primarily its laptops, are must-have machines for more and more students at such schools as Macalester College, St. Olaf College, St. John’s University and Winona State University. Now, for the first time, the Mac has achieved rough parity or slim majorities at some local schools, with hefty gains on other campuses.

The Mac’s rise on some local campuses is striking, though, given that Apple machines remain a tiny percentage of this country’s overall computer-using population.  It’s also worth noting that Apple all but lost the higher-education market a decade or so ago, so this is quite a comeback.

via Mac now edging into the majority at some local colleges – Your Tech Weblog.

I have heard of a place where humans do battle in a ring of Jell-O.